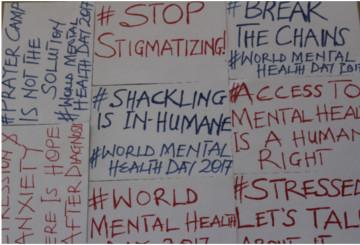 19th April 2013, global news - ACCRA – Patricia Awuah came to the centre of her village on Wednesday and learned about her rights. The 11-year-old Ghanaian student from Ngleshie-Amanfrom, a village in Kasoa west of Accra, heard music blaring nearby from five giant speakers. She came with her classmates to see what was happening. It turned out to be a program by the Human Rights Advocacy Centre (HRAC), a non-profit organization that educates Ghanaians about rights issues and advocates when there are potential violations. Wednesday’s theme was gender-based violence. Men, women and children also followed the music, leading them to the tents set up in the centre.

The crowd watched as the HRAC group performed skits and answered questions. Women in rural Ghana face barriers in accessing justice – a gap in education means they might not know they are being victimized, and if they do, what to do about it. HRAC’s Samuel Azumah Nelson finished up a dramatic skit and took the microphone to speak directly to the audience. He asks anyone who may be a victim of what they saw in the demonstrations (sexual harassment, abuse, unwanted pregnancy), “Report it, and make sure it will be dealt with.” Having it “dealt with” can be an even bigger hurdle – especially in marital conflicts, where women don’t have the resources to use legal means. “In Ghanaian culture, so many women are scared to report their husbands.

Most of these women don’t work and are dependent on their husbands,” says Jemilla Ariori, the organization’s legal and projects officer. Ariori was one of three legal advisors on hand Wednesday to speak individually with anyone who needed advice. Her colleague, lawyer Adwoa Yeboah Boateng, says that not only are they dependent, but they may not know their options. “They might not even know they can go to the court,” she says. “That’s why we are here, to say ‘you can do something about it.’” Ellen intends to do something about her situation (Ellen is not her real name, she asked for a pseudonym to be used). The 54-year-old woman says her husband of 25 years left her to marry another woman and is harassing her to leave her marital home.

What is worse, he took her three children away. According to her, he didn’t want to pay to take care of them. Instead, he left one with his mother and two with his sister. The two children with his sister, aged 14 and 10, were sent to an orphanage school in another town. The other, 18 years old, has finished school but is now being sent on errands for his grandmother. Ellen says she sees him occasionally, but that he looks thin and sick. “[My husband] wants to make me suffer,” she says in her native Ga, through a translator.

Ellen also wants what she feels is hers – the property she owned herself when she entered the marriage. According to the law, spouses split property obtained during the marriage 50/50. Anything obtained before or after should belong to the person who acquired it. But in practice, the woman is often powerless to enforce it. With help from the HRAC, Ellen will now be able to fight for her children and property in court if the matter is not solved through mediation. Calls to the Awutu Senya district overseeing Kasoa, and calls to Ghana’s Ministry of Women and Children’s Affairs, went unanswered at the time of this posting.