A study conducted in 2009 showed that 14% of Ghanian school students were sexually abused. In most cases the students being abused are female. Young girls and women in Ghana are commonly victims of physical, sexual, emotional, and economic abuse.

They are often subjected to harsh traditional customs such as child/forced marriage and Female Genital Mutilation (FGM). In an effort to combat this issue, HRAC has partnered with Ghana National Education Campaign Coalition (GNECC) to create projects that will minimize gender-based violence (GBV) in schools. These projects include research, policy drafts, and the training of advocates (policy makers/implementers). In July 2011 HRAC organized an interactive seminars at two different schools.

The purpose of the seminars is to create awareness about GBV and to inform the students of who they should contact if they are victims of GBV. One exciting breakthrough HRAC has made in fighting GBV occurred when HRAC received funding from Star-Ghana to take on a 2 year project focusing on the prevention of GBV in schools in Greater-Accra, Eastern, and Volta region. Furthermore, HRAC started the Gender Sensistisation Program in Dade-Kutupon Constituency in July 2011, which was created to educate students on GBV, its effects and possible preventive measures in two basic schools in the Dade Kutupon Constituency.

This program was organized completely by HRAC interns and volunteers. The HRAC team implemented drama skits in their education sessions on GBV to make it enjoyable for the kids to learn. Through this initiative alone HRAC was able to reach out to almost 500 students, a great success in terms of increasing awareness of GBV amongst students. 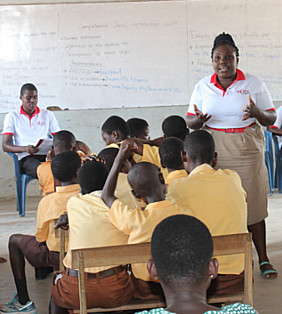